I realise that I haven’t written for a while; a combination of mood, work and wedmin, sunshine and social engagements have made me reluctant to sit in front of a screen when not absolutely necessary of late. I’ve even been eschewing my phone in favour of books and magazines in a bid to escape the dreaded pull of the blue light, which connects you to a million things that you could or should to be doing.

Still, lots has been going on so I wanted share a quick(ish) update with you here.

Last week I finally finished four-time World Ironman Champion Chrissie Wellington’s autobiography A Life Without Limits. I’d been listening to this as an audiobook following a recommendation from the Twins in Trainers and, as with finishing any good book, having reached the end I suddenly feel like I’ve lost a close friend.

I found Chrissie and her story beyond inspiring and it both entertained and spurred me on through countless long runs. This is an incredibly story of an athlete discovering her athletic capacity relatively late in life and trading a phenomenally successful career in international development for a brutal  training regime and killer races.

I really can’t recommend this book enough and although my reaction to Chrissie’s story hasn’t been to sign up for an Ironman (as I know one of my Twin pals has been tempted to do) if you are looking for something to get you out on a run, swim or cycle, look no further.

Talking of getting out to train, today I enjoyed my first swim in the Hampstead ponds. This has been on my ‘to do’ list for some time now and with the sun shining on London this weekend posed the perfect opportunity. It was just a quick dip today (as my friend Ariana and I were taking it in turns to guard the bags while the other swam) but it was utter bliss and I will certainly be making a return visit.

My favourite part was swimming alongside a duck and her little ducklings, all seen for the first time at water level. This was my first non-sea-based open water swimming experience and it was no where near as scary as I had feared.

I’ve also been enjoying (more traditional) weekly swim sessions in the St Pancras pool. Alongside my morning yoga ritual, these serve to stretch out my limbs and have proven good alternatives to running in the hotter weather. I have a back list of sets to share, which I promise I will do soon.

As for running, I’m back to a steady ebb and flow of weekly runs ranging from 3 to 13 miles. I really feel like I’m in a pretty positive place with running at the moment and despite a niggling pain in my lower right shin, I’ve been feeling good and, most importantly, really enjoying each run. 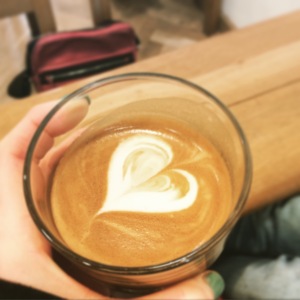 R and I enjoyed our first run in Epping Forest the other week and I can’t believe we’ve not ventured out there sooner. It was so beautiful and the trails are great, especially for practising hill running. It’s always nice to try a new route and to test the limbs on different terrain. Even better though, is its proximity to our friend Mark’s cafe Hucks, where we went afterwards for peanut-buttery crumpets, amazing coffee (with all of the non-milky milks) and live music. Basically the perfect day.

I’ve entered a few races in the autumn months but until then I’m just embracing running (and gossiping) with my pal Louise on our lunch runs, or avoiding the tube with my commuter jogs and just heading out on my long Sunday routes without any agenda.

Finally I also got down to the climbing wall for the first time in an age last week. My arm, chest and back muscles certainly benefited from an hour or so of bouldering (even if my feet didn’t thank me for being squished back into climbing shoes!) and although my climbing isn’t what it was, it was so nice to get out of my head and onto the wall for a while.

Another new experience since my last post was my first trip to The Sunday Assembly in June.

With the tagline ‘Live Better, Help Often, Wonder More‘, The Sunday Assembly was started by two comedians who decided that they both wanted to start something that was like church but totally secular and inclusive of everyone, no matter what their beliefs. The resulting group offers inspirational speakers, moving talks, music (and singing by the ‘congregation’), cups of tea and the opportunity to chat with lots of like-minded people.

I hadn’t especially thought that I had a Sunday morning void in my life (in fact my Sunday’s are strictly dedicated to the Gods of the Long Run), but I admit that there was something so uplifting and enjoyable about belting out songs with like-minded folk, as well as listening to inspiring short talks and feeling like a part of something bigger than myself.

The Assembly gathers twice a month, on the first and third Sunday’s, with the next London group on 7 August and I intend to be there.

That’s all for now but more soon I promise. Until the next, go out and enjoy something new this week!

Creating a home for this guy: an asparagus fern.
Building a terrarium
Today we enjoyed some time living slow, putting plants in jars. It was incredibly satisfying. #terrarium #shoreditch #liveslow
Who’s that girl (running around with you, tell me)