After a brief hiatus following a stint of over-training and a series of injuries, my love affair with running has resumed with a vengeance. Having dropped my weekly average mileage to around 25 miles, I am finding that when I do run I have more strength and energy, that my times are gradually improving and, perhaps most importantly, I am enjoying every run.

Last week I ran my first Park Run in months and although I had misplaced my barcode and didn’t get an official time (something which actually helped remove the unnecessary and nonsensical pressure I put on myself every time I run anything even resembling a race), unofficially I was pretty close to my 5km PB, and that was with something left in reserve as I crossed the finish line.

In fact, now I’m focusing on enjoying each run and ‘running not racing’ I am finding that I’m performing better and this showed again this weekend at the Bedgebury Forest 10km trail run, part of the Runner’s World Festival of Trail series.

I had decided to approach Bedgebury as a social run with friends rather than as a ‘race’ per se. Four of us had signed up to run and we’d planned to drive down together and then follow the run with lunch and drinks.

The thing I love most about trail running is that the terrain precludes any hope of a PB over the distance – with muddy tracks and hills, the run is more about enjoying the scenery and atmosphere that hitting split times, which takes the pressure off from the outset.

Despite promise of rain it remained dry and the weather was actually perfect for the race – a little chilly at first, but with bursts of sunshine and, once we were running, the ideal temperature. We arrived in good time to get our numbers, drop off our bags and do a quick pre-race warm-up. Due to a busy week at work I hadn’t run in a couple of days (which even on my reduced mileage is pretty unusual) and I was a little nervous about how my limbs would feel, especially as I knew the first kilometre or so was up hill. However, once I started running my body embraced the familiar movement and I felt surprisingly strong and light.

The first three kilometres passed pretty quickly and although I turned some music on briefly for kilometres three to six, I actually found that, for the first time in a long while, I preferred running without my headphones, listening to the birds instead and focusing on my breath. In regard to the latter, I am working on improving my breathing technique (as odd as that may sound!), attempting to fill my lungs properly by dropping my diaphragm and expanding my belly. This is not a breathing style I find easy or natural, but I have been promised it will revolutionise my running so I’m persevering, even though I find myself slowing down considerably as I concentrate on tilting my hips forward and allowing my stomach to inflate as I take long, deep breaths, rather than the chest-heaving, shallower ones that I’m used to.

Throughout the route I loved running on the uneven and muddy terrain, jumping puddles and skipping between pathways to avoid the squishiest of the mud. Focusing on where I was stepping rather than on the effort of running was a fun and welcome distraction, and something which kept me ever-present throughout. I actually found, having run a few cross-country races last year, that I was less afraid of the irregular pathways than I would have been previously, and discovered that I was able to ‘let my legs’ out on the down hills, passing people who were pulling up, holding back to avoid the mud and puddles.

I had mentally prepared for the final kilometre, which I knew was uphill, with a killer final few hundred metres of really steep incline to the finish. However, I found that by keeping my head down and my steps short, I was able to run the whole way, and although I felt a little nauseous at the top I didn’t stop until I crossed the finish line.

When the results came out I discovered that I’d knocked over three and a half minutes off my time from last year and had gone from 56th to 17th in my category. More importantly however was that I enjoyed the experience from start to finish. I loved going to the run with the girls, warming up together and having people to share the experience with. I loved being present and engaged during the run, getting out of the city and into the fresh air, listening to the birds and embracing the environment. And I loved having the girls there at the end of the race, collecting our medals and goodie bags together and relaxing post-run with Aperol and nibbles in the garden.

What this run has taught me is that I can just let go and enjoy ‘races’ without worrying about my times or putting unnecessary pressure on myself to perform. I’m never going to be a super-speedy runner and my times will never matter to anyone but me so there is no sense in piling on the pressure to do anything but the best I can on the day. 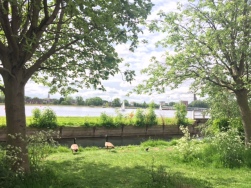 I’m so pleased that I’m in love with running again and that even with the pressure on our relationship can stand up to the strain. Despite slightly achy limbs from the hills, I couldn’t wait to get out again today and allowed myself a gentle 11km to stretch out.

I’ve got plenty of fun running to come and my next ‘race’ is my home-town of Stoke-on-Trent, and the Potters ‘Arf, which I’m running with my brother-in-law in June. I know it is a hilly course so again I’m writing off any hope of a PB, but I’m really exciting about running with Georg again and to having my sister and nephews there to cheer us on!

Until the next, happy running.