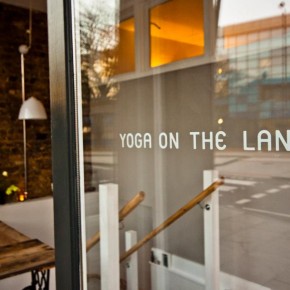 Amongst other things, Saturday’s yoga workshop at Yoga on the Lane in Dalston, set me in a good frame of mind for the week ahead.

As it happened, my apprehension at the prospect of a three hour class, (voiced in a post last week), was totally unfounded. The time was filled with a combination of physical practice and the theory and philosophy of yoga, offering plenty of time for rest and relaxation.

There was particular emphasis on yoga as a personal practice taken for oneself, rather than in competition with others – a message that I have to keep reminding myself of, as I do tend towards the competitive!

There was focus on getting the correct body alignment and benefits from each position, adapting poses to ensure that the flow of energy through the body and breathing were correct, rather than just and fetishising flexibility.

The teacher, Anna, was really good and very calming. She wanted us to take on board that yoga wasn’t an exercise class in the traditional sense, but a tool for finding a greater sense of peace and relaxation within oneself.

The idea of individual practice and working within ones own capacity was something which really struck a chord with me. This notion that through the practice of yoga ‘we can learn to be accepting of our limitations, truthful in our commitment to do our best, and content regardless of the outcome’ is definitely a takeaway for me that goes way beyond the yoga mat.

We left the class feeling incredibly relaxed and peaceful and it was with maybe a modicum of smug virtuosity that followed it up with a delicious juice at Harvest e8, an amazing organic store and cafe in Dalston.

This was a particularly good move as the store stocked tofutti cream cheese, which I have been hunting down since I tasted it in New York. They also had a wide array of vegan cakes, which we didn’t sample on this occasion as we were heading for and dim sum and plenty of green tea at Shanghai, but we have earmarked it for a return visit!

R and I also got out for a couple of short (6k) runs around Clapham Common (Saturday) and Clissold Park (Sunday) to test his injured leg, which seemed to hold up well. I was also running a lot more comfortably than I had been on Thursday and a quick weights and speed set on Friday had also left me feeling stronger.

Although these were only quick runs, it was really good to get out and enjoy the start of autumn; it was really perfect running weather. And all of this made Sunday’s roast dinner (the first of the season) taste all the more delicious!

Murder mystery tour of Ludlow.
Happy hen to the wonderful @amisharrock
There’s no I in Team.
I can’t help but feeling sometimes I let people walk all over me... 😂