After three weeks of carbs and cocktails in New York, combined with injury imposed rest, I’m finally getting back into my usual diet and fitness routine.

I can tell that I’ve had a break (and maybe one bagel too many) by the little mound that has developed around my tummy and by the extra squidge to my bottom! I can also feel it when I run, and my usual 10k loop has been truncated to 7.5k.

I caught up with an old school friend this week who is a physiologist and ex- footballer and he broke the rather depressing news that we lose our level of fitness at three times the rate at which it takes to gain it. Still, I’m fighting back with a vengeance and in a way it’s reassuring to hear that my fitness drop off is normal, as I had been rather beating myself up for my lack of running gusto! 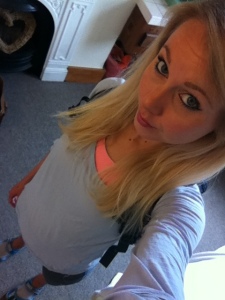 On Friday I decided to set a route between work and home and run with a backpack for the first time. In what I can only describe as the most middle class run ever, Louise and I met at Harrods and yomped with our backpacks through Chelsea and into Battersea to the Clapham Junction Whole Foods. Here we stopped for a smoothie and to stock up on hummus and coyo yogurts before jogging home, a nice little 8k in total.

Running with a backpack wasn’t as bad as I’d anticipated and at the moment, while I’m feeling slower and less fit than before my injury, it was  nice to to accept that we would take the pace down a notch and try a new route. Such commuter runs are definitely the way forward, especially given the heat on the tubes at present.

Today I also finally got myself to a yoga class with my lovely friend and fellow dancer, Lucy P. The class was with Yogarise, held in the studio at the Bussey Building in Peckham.

While I find when I’m running I focus my energy on suppressing muscle fatigue, aches and pains, at yoga I really find myself listening to and engaging with my body.

Having always been so flexible, I was shocked at how tense my muscles had become and how positions that had previously been easy to manoeuvre into had become trickier.

Swan pose highlighted how tight my hip flexors a have become while a pose which involved laying backward on bended knee made my quads burn more than any number of squats. My hamstrings weren’t much better and they screamed through every stretch. However, by the time I finished I felt like all of my muscles were longer and leaner than before.

I always forget what bliss yoga is and how amazing I feel afterwards, a feeling only matched by a spa day or full body massage. As a result of this morning’s class I have spent the whole day feeling centred and suitably stretched – yoga is definitely food for the soul.

This week I’ve learned to be humble when going back to an exercise after a break, to forgive myself my weaknesses and build on my strengths. I’m already looking forward to my next yoga session and ready and raring to take on my next run.