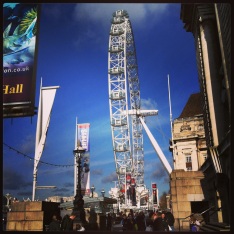 I think I first caught the running bug while at college. Although I don’t recall the exact moment that I went from reluctant high school cross country ambler, to jovial jogger, to regular race runner, at some point between 16 and 18 I made the decision to stop telling myself that ‘I’m just not built to run’ and got my short-legged, curvy frame onto the treadmill.

I didn’t start entering races until years later when I moved to London and became hooked on health and fitness magazines which promised that the only way to train was with an event to aim for (a truth which I now believe should be universally acknowledged). Since then, I’ve run three half marathons – Run to the Beat in 2010, the Great North Run in 2011 and the Royal Parks in 2013 – and taken part in a good number of Races for Life, but it wasn’t until around six months ago that I took my running outside in a big way.

Don’t get me wrong, I’d chalked up a good few outside miles here and there – the occasional loop of Hyde Park, the odd run on the North York Moors and the periodic jog through the Warwickshire and Staffordshire countryside – but the majority of my training had been very gym based and I had little interest in going out into the real world where a) I would have to learn to pace myself without the aid of a machine b) it was potentially very cold, wet, hilly or dark and c) the total absence of any sense of direction may leave me lost, running for days trying to make my way home like some modern day Odysseus. But this all changed when we started training for Tough Mudder last year.

For one, we started training in the late summer and who doesn’t want to be outside when the sun is shining? Secondly, as I’m training with my colleagues we are getting most of our weekday mileage in during lunch breaks, and after a morning cooped up in the office an escape to the park is a welcome relief. Thirdly we are located slap bang in the centre of London, with Green Park and St James’s Park on our doorstep and the river only a few kilometres away, so there’s really no excuse regarding good, safe routes.

As with anything new we started small, with 2 km loops of Green Park interspersed with strength sets of squats, sit-ups, press-ups and (the dreaded) burpees. Our expansion into St James’s Park came purely accidentally when a member of my team hurt her back, allowing her to run but preventing her to do impact strength training. That day we chalked up 6 km straight, which at that point was the furthest one of my running partners had gone without stopping. A hangover day and reluctance to run saw us mix up our route and venture over Westminster Bridge and down to the river, pushing us up to 7.5 km. Now, three bridges later we are hitting just over 10 km in our lunch break.

I’d always thought running outside would be more difficult than inside but with the views of London and the tourists to dodge, as well as the opportunity to catch up on gossip as we run, I rarely notice one kilometre turning into five and five into ten. This became particularly apparent when I returned to the treadmill last week and struggled to run 6.5 km. With no views, fresh air or fun chat to keep me going I noticed every metre even though I was running slower, on flatter ground and going a shorter distance.

I can’t recommend getting outside to run highly enough. Even in the rain and cold, once you get going you get quite toasty and the sense of achievement is so much greater. With blue skies, striking vistas and the endorphins pumping what more could you want?

Read more about the events mentioned in this post at the following links:
Tough Mudder
Run to the Beat
Great North Run
Royal Parks Half Marathon
Race for Life

2 thoughts on “Let’s take this outside”