This weekend was my sister’s birthday, so on Thursday evening I headed up north for a couple of days to celebrate with her. 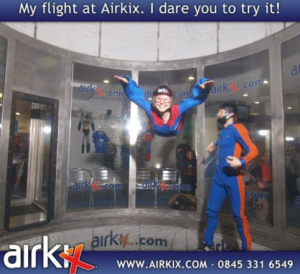 I’d clustered my runs, going out five times between Monday and Thursday, and saving my long run for my return on Sunday, which meant I could let my hair down for a couple of days.

As a surprise birthday treat, her best friend and I had booked the three of us in for a flying experience at Airkix in Manchester. I wasn’t totally sure what to expect, but it sounded like lots of fun and we decided that Jo would love it (and if I’m honest, we were pretty excited too!).

Friday morning saw us piling into the car and heading through the snow to Trafford ready for our 10:00am flying lesson.

The lesson began with a briefing with our (very handsome) instructor, Andy. Here we learnt the correct body position in which to fly – chin up, a strong core with a slightly arched back, straight legs opened in a ‘v’ and arms bent at right-angles in front of us – and a series of hand signals that he would use in the wind tunnel so we knew how to adapt our position.

It was then time to pull on our jumpsuits, put our goggles and helmets on and get ready to go.

We were in a group of five, the three of us plus two guys. One of the guys went first and it was useful to watch his body position and movement before we entered the tunnel.

Andy had warned us that we might kick our legs, as if we were swimming, but that we should aim to keep them still. The first guy was moving his legs quite a lot so I made an extra mental note not to hold mine still.

I was second in line. It was strange going into the tunnel and trusting that you would just float in the air. Andy helped me in and once I was flying I concentrated on keeping my core strong and pointing my toes.

It was the weirdest sensation levitating above the ground and it was quite hard to take in while focusing on keeping your body in the right position. We learned to use our hands to steer left and right and to move our head to move up and down.

There was a camera filming you as you were flying, with a video playing on a delay, so when you came out of the tunnel you could look at how you did and what to correct for your next go.

The second guy came after me, then it was Jo’s turn. As we had hoped, she absolutely loved it and mastered it immediately. She also braved the ‘run and superman’ entry jump on her second go, which I have to admit I chickened out of!

On our second go we all went to the top of the tunnel with Andy, spiralling round and round to reach the top, which was just incredible.

After the (quite literal) high of flying we headed to Trafford for cups of tea before having a potter around the shops (where I treated myself to two new sports tops!).

The evening was spent sipping cocktails and enjoying a tasty supper with friends at Mr Cooper’s House and Garden in Manchester.

The cocktail menu was amazing (so I sampled both a pre- and post-supper cocktail) and with a bit of pre-warning they were able to put together a vegan menu for me, which was truly delicious!

I have to admit that Saturday morning saw me with a slightly sore head from the cocktails and really surprisingly achy shoulders from flying, but it was certainly worth it for an absolutely blissful day with my sister!

After a lazy train journey back to London and an early night on Saturday I was back in shape to run my 15 mile target on Sunday with Bex, sporting one of my new running tops (underneath a further three layers of clothing!).

We ran from Clapham to Richmond along the river, finishing up at Tide Tables Cafe for some lunch.

By Sunday afternoon I was totally exhausted, (and indulged in some ‘active rest’), but it was certainly all worth it and a very successful and super-fun weekend!

One thought on “Come fly with me”