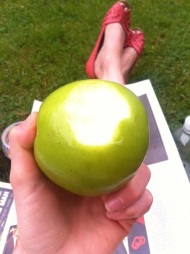 I think I would be doing a gross disservice to the American gastronomic tradition if I didn’t write at least one post about food during my trip, so here goes.

While there is a tendency to write-off American cuisine as a mass of burgers and doughnuts, and thus not terribly vegan or waistband friendly, my recent experience has revealed this to be somewhat of a misnomer.

Don’t get me wrong, if you want fast food there is a Dunkin’ Donut or Shake Shack on every corner, but there are also plenty of juice bars and health food stores too.

Mexican, Italian and Turkish influences run through many restaurant menus, and there are plenty of tasty looking salads, flatbreads, falafel and bruschetta options, as well as vegetable tacos and bean-based chillies to choose from. 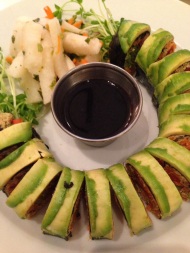 My favourite vegan restaurant discovery is the Peacefood Cafe at 460 Amsterdam and 82nd Street, with a deliciously overwhelming menu of raw food, salads, sandwiches, mock-meat dishes, soups and sushi, as well as a multitude of juices, smoothies, cakes and pastries.

It is so good, in fact, that it has warranted more than one visit; the first time I enjoyed a Japanese pumpkin, ground walnut, cashew ‘cheese’ and onion marmalade rye sandwich, while on the second trip I had the some avocado, carrot and almond pâté sushi and a slice of raw cashew nut ‘cheesecake’ on a raisin and walnut base.

I have also made a couple of stops at Absolute Bagels on 2788 Broadway and 107th Street, which offers tofutti toppings from raisin and walnut (perfect with coffee for an alfresco breakfast by the river) to roasted vegetable and sun dried tomato (a quick and tasty supper snack!)

Other surprisingly vegan-friendly locations have included the food hall at Grand Central Station, where I indulged in a mixed vegetable and hummus pitta from Eata Pitta (which was so big it lasted me for two meals), an all-American diner in Queens, where I managed to get a vegan friendly vegetable wrap (although I had to ask for it minus the cheese) with some rather decadent sweet potato fries and Citifield baseball stadium, where I sourced some vegetable tacos.

Even the regular supermarkets are stocked to the rafters with vegan options, with milk alternatives of every type and flavour from vanilla almond to chocolate coconut and all other variants in between.

Almond Dream yogurts have become a supermarket staple during my trip, as have the mini packs of hummus, (which is as ubiquitous in the States as in the UK). A particular favourite of mine are the Sabra hummus and mini pretzel cracker snack packs, which are perfect for lunchtime snacking.

Ian, a friend made on my trip and former vegan himself, has introduced me to tofutti cuties – vegan ice cream sandwiched between biscuity wafers, which are just too tasty. He also popped a bar of extra dark salted chocolate with nibs into my basket on our last supermarket trip and it is quite a discovery!

The fruit and vegetable selections in supermarkets are also somewhat overwhelming and everything from apples to avocados seem super-sized and luminous. The grapes are so deliciously more-ish we’ve termed them ‘crack grapes’ and a bowl sat next to me as I work doesn’t last long.

The drinks selection is equally plentiful and while getting a good cup of English breakfast is a struggle (I’m using Lipton at home and you need at least two bags to get any kind of strength), I’ve enjoyed an iced green tea blackberry ‘mojito’ from Starbucks, (which also uses vanilla soya in their coffees here, for an added indulgence), and an espresso, almond butter, banana, cinnamon and oat milk shake at The Bean coffee shop in Williamsburg (almost a meal in itself).

While at the Met, I’ve had some early  morning vegetable juices while sat on the steps in the sunshine before work. With carrot, kale, beetroot and cucumber among the many ingredients on offer and with the juice van’s proprietor offering me free samples and a large juice at less than the price of a small (much to the annoyance of the other customers) it would be rude not to! 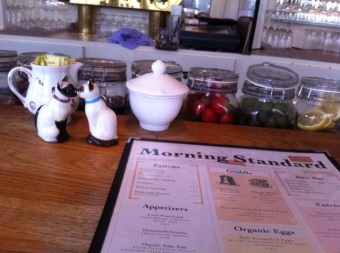 My friends here also seem to be rather the cocktail connoisseurs and I have been introduced to Mimosas (champagne, orange liqueur, fresh squeezed orange juice and a dash of blood orange), at brunch no less, under the High Line at the Standard Grill! I have also sampled a Rum Old Fashioned (El Dorado 15 yr, orange, brandied cherry and angostura bitters) and a French 75 (gin with fresh lemon juice and champagne) at The Rum House, just off Time Square, as well as a variety of too delicious cocktail combinations that I can’t even name, shaken up by Ian’s bartender friend, who I can confirm, really does make the best cocktails in New York!

What’s also great is that at every restaurant and bar you are given water on arrival and it is topped up as quickly as you can drink it, so you don’t overeat due to thirst, or suffer a sore head due to dehydration!

From all of this all I can say is that it’s lucky I’m running again and that I’m walking a good few miles each day. I’ll be back on my best behaviour when I’m back in London, but for now I will just say bon appetit!