I was debating whether or not to write about this weekend after such a disappointing performance on Sunday, but now, having processed the day and having figured out a strategy going forward I decided, if nothing else, writing would be a cathartic process and help to put the day to rest, so here goes…

I suppose it was a bit of an omen when on Saturday night my running watch decided to stop working on me, meaning that I would have to track my pace and take my splits just using my phone (less than ideal). Still, I slept well on Saturday night and felt good Sunday morning. I had a bowl of raw porridge (oats, chia seeds and raisins that had been soaking in water and a dash of soya milk overnight – delicious), got ready and headed to Ealing.

One of my favourite aspects of race day is spotting fellow runners on the journey to the race. It gives me a sense of being part of something, seeing fellow sympathisers who regard running 13 miles on a Sunday morning a good idea. At Clapham there was one other runner in my carriage and we caught each other’s eye and smiled and nodded in mutual understanding. By Stockwell and a switch to the Victoria line there were about 10 of us. By Green Park and the Piccadilly line the carriage was full of runners heading to half marathon Mecca.

On arrival I met up with Lou and Lucy, who I had planned to run with, and all would have been well if I hadn’t then decided to make a last minute trip to the loo. The queues were enormous and so slow moving; I waited for 20 minutes, and as I neared the front of the queue I heard the race start and then the pacers I wanted to follow cross the start line.

In perhaps an unnecessary panic and having lost my friends I made the phenomenal mistake of sprinting the first 5k to try and find them and to catch my pacer. While this initial run felt quite good EVERYTHING that came afterwards was agony. It wasn’t my legs or my aerobic fitness that were the issue, but an absolutely crippling pain in my lower abdomen, running into my back, which no amount if regulated breathing, stretching, loud music, slowing down or speeding up could stop. After 10k I was ready to give up because the pain meant that I wasn’t enjoying the run at all and I just wanted to cry. At 15k I realised my time and pace were totally shot and decided to just focus on finishing. I had been tag teaming with a blonde girl from the 15k point and with a mile to go we were both bordering on a walk, so I squeezed her arm and said ‘come on let’s finish this together’ and we both picked up the pace for the final stretch. By the end I felt so nauseous with the pain I had to stop, bent over forwards for sometime after I crossed the finish line and ended up going to the medical tent to be checked out.

So not the best race ever.

What disappointed me most wasn’t not getting a great time, but that something I’d been looking forward to turned out so badly and which I didn’t enjoy at all. I love running, but on Sunday when I felt exhausted and overwhelmed by pain and could see my hope of a PB slipping away I felt like a fraud, like I’m not a runner at all. I also was consumed by panic that I’m not going to be fit enough for Tough Mudder or the Paris Marathon. I know this is silly and defeatist, and I know we all have good and bad days, and now I am starting to come to terms with that, but at the time I was inconsolable. 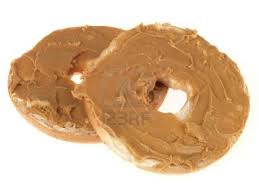 R had been at the race to cheer me on, (which actually prevented me from giving up after 10k), and when the nausea had started to subside he took me for a cup of tea and peanut butter bagel at a cute cafe in Ealing called Artisan Coffee (which I would strongly recommend). Having not felt at all hungry the salt and sugar from the pb helped to settle my stomach and my faintness and having talked the race through with him I felt phenomenally better.

With a bit of Googling and analysis of my race we concluded that the pain could have been as a result of a combination of dehydration, anxiety, going off way, way too fast and breakfast too close to my run. I know Google is no doctor, but it was reassuring to see that other people had suffered from a similar kind of pain under similar circumstances.

We also decided that if I want to improve my race times and get over my anxiety it’s time for me to join a running club. So when I get back from Frankfurt next week I’m going to go to my first running club session.

My marathon partner Becks also messaged to suggest we enter a few more half marathons just to get the distances in and not for times and my TM teammate Anna suggested we do some longer runs on our own terms – when we are feeling good rather than when an event dictates.

I love how much everyone knows how much this means to me and how disappointed in myself I am and I’m so grateful that they are helping to put in suggestions for strategies going forward.

As for me: I guess I just need to get my trainers back on and get out on the road again. Am I a runner? Well after all of that, I still want to get out for a run so I guess, PB or not, I can’t shake the running bug!

Scuttling in the park on her new scuttle bug bike. I’m not sure when she became such a big girl.
Pure joy. 2 1/2 hours of entertainment for the bargain price of £9.
Ready to roll.
Buttercup 🌼