Last week was my birthday.

This year, somehow, from not having organised any festivities and being consumed by the usual denial and panic of yet another year passing with terrifying rapidity, I seem to have experienced the best birthday on record.

It began the Tuesday before with a night of fizz and gossip with one of my oldest friends, Katie.

Despite her working in London three days a week and being a fellow runner, thus offering every excuse to get together, we don’t see each other anywhere near as often as we should, or as I would like.

It was the loveliest of treats getting to spend an evening with her and amongst other things we discussed running the Copenhagen half marathon together and as a result this has quickly made it onto my ‘must run’ list.

A blissful evening of catch-ups and cocktails with my good friend and former colleague Nina promptly followed on the Wednesday.

We enjoyed two-for-one on a selection of delicious cocktails at the Lost and Found Bar in Balham and it was only the fact that I had been running earlier in the day that permitted me to indulge without too much guilt!

The venue itself was cute and cosy and the cocktails were a total bargain; definitely worth a trip if you are Balham way.

I had booked Thursday (my birthday) as annual leave way back in August, with the intention of spending a good few hours at the gym/pool, a further few hours drinking tea, reading the paper and doing the crossword and maybe going to a gallery to see an exhibition. 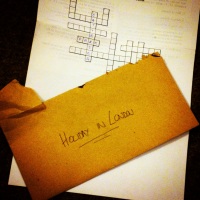 My boyfriend, however, had other ideas.

On Wednesday he had requested that I pack an overnight bag, complete with evening dress, which he would collect from me at my convenience.

As it happened, he met me from the office and exchanged my bag for a cup of tea and a hand-crafted crossword with clues to be solved throughout the course of the following day (when instructed) with each revealing the location of an activity to take place.

The first clue was to be fathomed that night to give me the location of our meeting point at 9:30am the following morning when I was instructed to wear clothes suitable for ‘mild exercise; no skirts or baggy trousers’.

Having solved the first clue, on Thursday morning I met him at Coffee Affair in Queen’s Town Road Station, Battersea.

Here we were received with a friendly welcome enjoyed a delicious breakfast of raw vegan porridge with strawberries and fruit compote and plentiful amounts of tea.

From here we wandered to Battersea Park where he had booked a tandem, to satisfy our joint love of all things outdoors and sporty.

With R on the front we rode easily. I was happy to just peddle and relinquish all control when it came to steering, (really not my forte), and R was adept at manoeuvring the bike around any corners and through any narrow gaps as required.

It was perhaps with a little too much complacency that we swapped seats and, within minutes, with me at the helm, found ourselves toppled into a bush. As a result my tenure in the driver’s seat was very short-lived and we quickly swapped back.

Despite the fall (and resultant grazes), I loved the tandem ride and would go again in a flash! However, the time passed all too quickly and soon it was time for us to return the bike and for me to solve a second clue.

This took us to the South Bank (possibly my favourite place in London), and the Hayward Gallery, where we enjoyed an exhibition on love (slushy but appropriate), a much needed cup of tea, a spontaneous slide and a stroll to clue three, the National Portrait Gallery.

The BP Portrait Award, held at the NPG, is my favourite annual exhibition. It falls over my birthday every year and I normally go and see it with my dad.

However this year he hadn’t been able to get into town during the run of the exhibition and I had been too sad at the thought of going it alone.

As such I was overwhelmingly pleased that R had decided to take me and he made the perfect exhibition companion, allowing me to make three circuits galleries and even playing along with my game of ranking the top five paintings (although we had to stretch to the top seven this year as the decision was tough).

With a cycle and two exhibitions under our belts we headed to clue four and lunch, which was at Moaz, the most delicious falafel café in London.

We stocked up our pittas with falafel, hummus and more salad that would really fit and I endeavoured to solve the next clue.

This took us to Mayfair and R’s club, where he had our bags ready to allow us to change, before enjoying Bellini’s in the bar.

I have to admit I was relieved I’d packed heels and a LBD as I don’t think my usual jeans and pumps would have cut it!

For pudding R had also managed to source a Toffutti stockist in London, (I have been craving Toffutti Cuties since my return from the States but have been unable to find them at the usual suspects – Whole Foods and Planet Organic) and had it not been for a slight melting incident, we would have enjoyed Toffutti ice creams

Full of champagne and 1930s style decadence we picked up our bags, hailed a cab and headed on to clue six, the most gorgeous boutique hotel in Soho, Hazlitts, where R already had my presents waiting.

He had bought me a new, superlight, running rucksack, complete with desired waist strap for my commuter runs.

As if this wasn’t all enough, inside I had the complete works of P.G. Wodehouse (my literary indulgence), and tucked inside the first page, next to a beautiful inscription, were two theatre box tickets to see Jeeves and Wooster! As you can imagine, at this point I cried.

With time to spare before the theatre, R suggested a bath in the beautiful roll-top tub and bought me a glass of wine while I enjoyed the bubbles.

We headed to the theatre where we had a box to ourselves with champagne and truffles waiting and a waitress to look after us for the evening.

The show was truly fabulous and full of fizz we headed out to a cocktail bar for one final birthday cheers before heading back to the hotel.

Just in case all of this wasn’t enough to make me fall absolutely, totally and utterly in love with him, he ordered us breakfast in bed for the next morning.

Over the weekend we headed up to my parent’s for a family weekend to celebrate mine, my dad’s and my Aunty Janice’s birthdays with a tea party.

We had made a last minute booking at Crewe Hall, which was beyond beautiful and on arrival were greeted with a glass of fizz. My sister had prepared a tea-based quiz, as well as some other tea inspired games, which were really fun and kept us all entertained.

The afternoon tea was delicious and I had a full tray of vegan sandwiches and treats.

It was utter heaven to spend some time with my family and to see my nephews, who are the sweetest of hearts. While we seem to be going a turbulent period with regard to family health at the moment, knowing we have each other and how well we work together as a team filled me with so much love, gratefulness and happiness.

I was showered with the loveliest and most thoughtful of gifts, including a much needed new pair of trainers – Nike frees – from my parents.

After tea we went to my Aunty Janice’s house for a luxurious afternoon of Pimm’s, board games and catching up time.

On the Sunday we enjoyed a little stroll around Trentham Lake, a lazy salad lunch, and I had chance to catch up with another old school friend, before heading back to London, where my housemates prolonged the birthday festivities with pampering a presents.

Finally, last night I celebrated with my Tough Mudder teammates with a 10km run to Anna’s house, where we cooked supper, enjoyed vegan cakes prepared by my dancing and yoga partner, Lucy, and watched Pretty Woman in our PJs.

Now if that isn’t the most perfect birthday on record, I don’t know what is! Suddenly 29 doesn’t seem so bad after all.