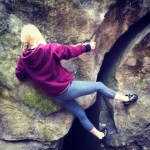 I’ve just returned from a perfect long weekend of climbing and campfires in Fontainebleau with a group of friends from The Arch.

After much planning and anticipation we packed our climbing shoes and chalk bags and set off from work on Thursday evening, making our way down to Calais for a 9pm crossing followed by a 4 hour drive, through Paris and out to Font.

The combination of good company, climbing, camping and cooking over a fire made for a blissful escape from London. When your greatest concern is which crag to visit and whether you have enough firewood for the evening, life seems pretty good. 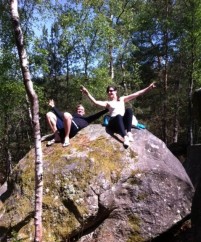 The climbing was amazing; even better than I’d anticipated. I’d gone with expectations of struggling, both with the climbs and with my own fear, but as it turned out, with bouldering mats and good spotters I felt a lot safer than I’d expected to and I surprised myself in terms of the routes I could climb and my endurance throughout the course of the day.

I think my favourite aspect of climbing outdoors was working a route with a group of people of a similar ability, figuring out the climb together, move by move, such that a climb we never thought we’d complete eventually became possible. I did push myself on some trickier, (trickier for me at least!) routes, but my main objective was to get my outdoor mileage up and to enjoy the climbs, both of which I achieved.

I also starting reading Dave MacLeod ‘9 Out of 10 Climbers Make the Same Mistakes’ on the drives between crags. While there were mixed feelings in the group about Dave’s advice (and I think I began to drive everyone crazy by beginning every sentence with ‘Dave says…’) I found some of his pointers particularly applicable to me and the way I climb. Specifically, he stressed the importance of not remaining within your comfort zone and ruling out or avoiding particular climbs, for example slabs or crimpy routes, on the basis of weaknesses in these areas. Instead, he recommended working these routes and building up strength in them. While this may seem obvious, sometimes it’s useful for someone to just highlight the point, and it’s also nice to know that other people have the same hang-ups or worries over particular routes and that they can be overcome. As such, I am now officially declaring that I will overcome my aversion to overhangs and will be working on them henceforth! He also promoted the idea of passive learning; watching other climbers between your own climbs, learning from their moves and errors, as well as reassessing your own performance post-climb. Again this is something that I found really useful in eventually completing routes that I hadn’t previously thought that I could finish.

The trip also saw me learning more about my own climbing technique, where my strengths and weaknesses lie, and how to adjust a climb for my build. I’m shorter and don’t have as much upper body strength as many of the people I climb with, so pully and reachy moves are no good for me. However, I’m pretty flexible, have a good sense of balance and feel quite stable doing a rock over, so when in doubt, I found that if I aimed for either a high foot or high heel and rock over, or worked to match my foot to my hand, I could complete a climb.

On top of the climbing was the camping and, most crucially, the fire. Food cooked on a fire is just infinitely more delicious than anything cooked in an oven. We cooked jacket potatoes in foil, (which came out so buttery and fluffy on the inside and with a deliciously crunchy skin), roasted vegetables, (do not underestimate how tasty and perfectly caramelised an onion in olive oil, wrapped in foil and cooked on a fire can be!), and peppers stuffed with couscous, courgette and garlic with perfectly singed skins. During the days we also ate well, and I found myself consuming way over my normal calorie intake, but certainly felt I needed it. I ate little and often, with some carbs, but mainly focusing on calorie dense snacks in the form of nuts and peanut butter (everyone’s staple food for the trip!), as well as apples and bananas.

Sandra, in her bag of wonders, always had anything anyone could want, from a bottle of whiskey, (which was brought out to the crag on the last day), to painkillers, ice packs for injuries, cereal bars, chocolate, tissues (for wilderness toilet trips), and plasters. For future trips, I think the most crucial additions to my own packing would be a sharp knife and a head torch.

After such a perfect few days I’m suffering post-Font blues. I went for a climb at The Arch yesterday and will be back again tonight, but it’s just not the same. We have already started to plan our next trip, but I’m also hoping to get out to Harrison’s Rocks in Kent before then to keep up my outdoor climbing. I’ve also found that laying off the running for a few days has helped my ankle and I’m hoping to blitz a quick run at lunch today to get my endorphins up and beat the blues.

2 thoughts on “First trip to Font”