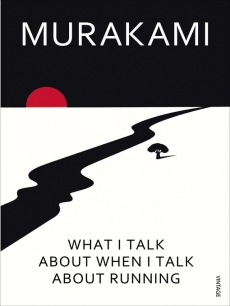 It is not uncommon, when I’m lacing up my trainers on a chilly, dark morning, or packing up my running rucksack at the end of a busy day ready to run my commute, or pulling on a jumper before I dash out for a lunchtime jog, that someone asks me why I do it.

And while my usual response is a polite smile and a laugh as if to concede to the madness of my actions, the fact is, that this is something that I ask myself sometimes too.

I’ve recently been reading Haruki Murakami’s What I talk about when I talk about running and it has left me quite reflective about my own running practices.

In his book Murakami notes:

‘I only have  a few reasons to keep running and a truckload of them to quit. All I can do is keep those few reasons nicely polished.’

I share these sentiments and I don’t doubt that they are shared by a great many other runners too. On cold, dark winter nights it is so easy to think of reasons not to get out and run. But, as Murakami says, the important thing is push these to the back of your mind and focus on the positives. So here are some of my reasons for running,  I hope they help inspire you:

For one, running is pretty low maintenance. As Murakami observes:

‘you don’t need anybody else to do it, and no need for special equipment. As long as you have running shoes and a good road you can run to your heart’s content.’

This is of course true. When you run you can just lace up and go. No flat tires, no car journeys to the pool, no partners or opponents necessary, no rackets or hockey sticks, no instructors: just you and your trainers and the road is your oyster.

Secondly, I am a fidgeter. I can’t help it; I’m just not terribly good at being still and I never have been. At work I’m up and down from my seat at least once an hour and the thought of a day in the office without a run to break it up, or at the very least a brisk walk to burn off some energy, drives me crazy.

When my brain gets active and starts whirring I need to run to help filter through my thoughts and put them into some semblance of order. Some of my best writing is done after a run; having oxygen pumping to my brain brings clarity and creative inspiration like nothing else, it is like somehow the act of moving allows the thoughts to flow properly.

And this feeling of apparent enlightenment which comes from running has some grounding in science. Researchers believe that many of the whole-body effects of cardio exercise – such as the increase in blood flow resulting from a raised heart rate – may have neural benefits.

A 2009 study by the University of Carolina showed that elderly subjects that did regular aerobic exercise had more small blood vessels in their brains, when compared with non-exercising controls. A Swedish study, conducted in the same year, with a sample of 1.2 million 18-year-olds, showed a a positive correlation between aerobic exercise and intelligence – a correlation which held even when other factors including genetics were taken into account. Meanwhile a study from the University of Illinois also showed an increase in reaction times in a memory test after aerobic exercise, when compared with a control group.

Although these studies aren’t the final word on the matter, and research continues in this area, it does appear that particular exercise growth factors are key in generating new brain cells.

What is more, running is addictive, so once you start it’s hard to stop. While many, more sedentary people may find this hard to believe consider this: exercise raises endorphin levels in the brain. Endorphins are endogenous morphines that alter mood and block pain, much like opiate drugs such as morphine. And as with morphine, the opioid rush that comes with the release of endorphins in the brain is addictive – so much so that when psychologists at Tufts University administered naxolone, which blocks the the action of opioid drugs to a group of rats who were accustomed to vigorous exercise, the rats displayed symptoms of withdrawal, including teeth-chattering and shaking, just as morphine-addicted rats would have reacted under the same circumstances. 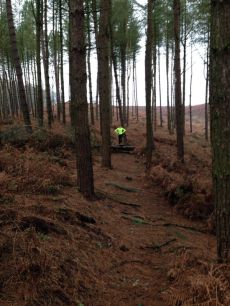 Mind-boosting and addictive power aside, I also go running because I love to be outside. Don’t get me wrong, I like to cosy up at home with a book and a cup of tea as much as the next person, but to spend a day without sunlight and fresh air would be torture.

Over the winter months when I’m up early for work, before the sun rises, and home long after it has set, it could be possible to go a whole day without seeing natural light. I just can’t let this happen so running in my lunch breaks in the winter means that I can be outside and warm and then snuggle up of an evening when the sun sets and the temperature drops.

I also like the solitude offered by running. It is an escape from the pressures of the expectations and desires of other and a chance for silence.While in my day-to-day life I love chatting with other people and sharing experiences, sometimes I just really like to be on my own.

I’m not afraid of my own company, in fact (as socially unacceptable as it may sound) sometimes I prefer it. I’m happy to squirrel myself away, listen to music or the radio and let my mind wander and running provides a perfect cover for this desire.

I love this quote from Murakami, who also enjoys the silent space that running offers:

‘All I do is keep on running in my own cozy, homemade void, my own nostalgic silence. And that is a pretty wonderful thing. No matter what anybody else says.’

But finally, and perhaps most importantly, like Murakami it just suits me to run.

I will leave you with a final quote from him, as he can express it better than I ever could:

‘I don’t think it’s merely willpower that makes you able to do something. The world isn’t that simple. To tell the truth, I don’t even think there’s that much correlation between my running every day and whether or not I have a strong will. I think I’ve been able to run for more than twenty years for the simple reason: it suits me.’